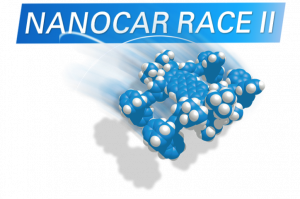 Madrid, 16th of November, 2021. The nanomechanics at IMDEA Nanociencia are getting ready their engines for the international Nanocar Race. The research groups led by David Écija and Emilio M. Pérez at IMDEA Nanociencia (Madrid) will participate in the second edition in Toulouse, March 2022. The Nanocar Race is the world’s smallest car race covering the longest distance possible on a gold track for 24 hours, where the vehicles are molecules driven by the interaction with the tip of a scanning tunneling microscope (STM). The overarching goal of the competition is to advance the development of nanomachines capable of real work, like carrying molecular-scale cargo and facilitating nano-fabrication.

Not everyone can join this competition. After pre-registration, two years are given to each team to consolidate their molecular designs. Nanocar drivers use the tip of a STM microscope to help jolt their molecules along, typically by just a few nanometers each time, so that the nanocar race takes place on a very small scale. Touching however is forbidden. The vehicles must be drivable without mechanical push from the tip. The propulsion mechanism can be either inelastic (related to the excitation of vibrational modes or to current-induced structural changes) or dipolar, resulting from the repulsion or attraction between the nanocar and the STM tip. In the Nanocar Race II two sessions will happen, depending on the “weather” conditions: ambient or ultra-high vacuum. 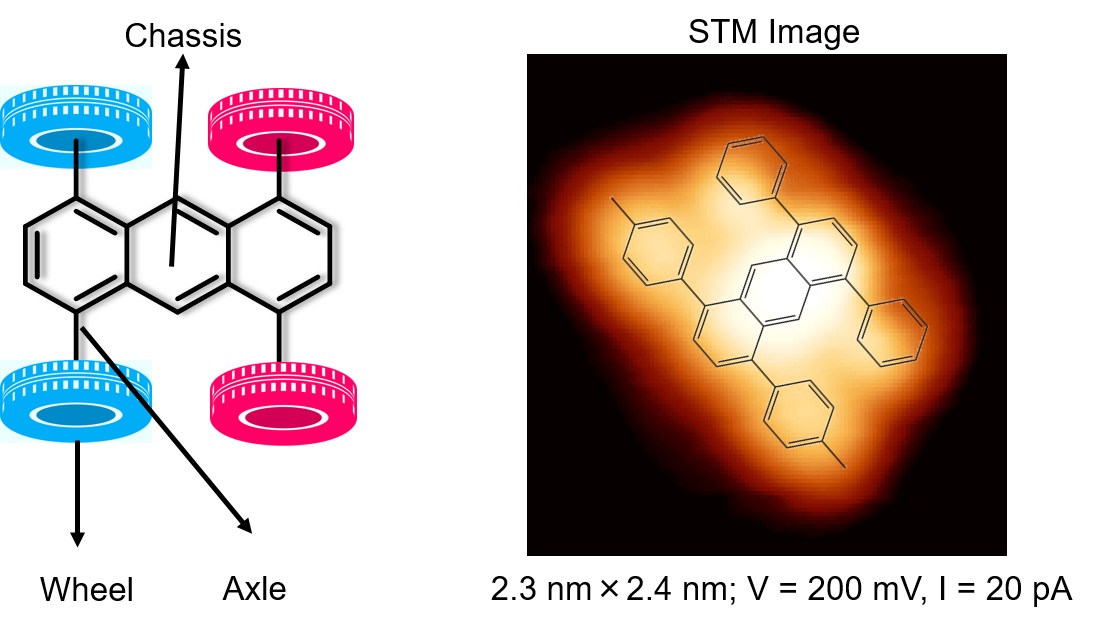 With a lateral size of a few nanometers, a nanocar is a molecule with a distinguishable front and rear. Its chemical structure allows the nanocar to move on a surface when a STM tip is approached. The IMDEA Nanociencia’s NANOHISPA team joins the international group of certified teams in the ultra-high vacuum nanocar racing with their molecule “SPARC”, consisting on 70 well placed atoms. With rear wheels of toluene and front wheels of benzene, built on an anthracene chassis, the minimalistic hydrocarbon nanoarchitectonics of SPARC should help them navigate the speedway in a solid manner. This molecular design includes a permanent dipole moment “motor”: permanent dipoles make the car susceptible to electric field gradients, and can be used to propel and maneuver them. The small anthracene chassis keeps the weight at minimum, while its polyaromatic nature ensures sufficient downforce for fast cornering. Meanwhile, the benzene derivatives at the wheels allow little interaction with the gold track, promoting acceleration and top speed on the straights.

The nanocar SPARC will be driven by the NANOHISPA team with members of the research group of Prof. David Écija at IMDEA Nanociencia. The team of drivers, with Dr. Koen Lauwaet, Dr. Ana Sánchez, Dr. Ignacio Urgel and Dr. Ana Barragán, all led by Prof. David Écija, will go helmets on and fire the engines for the most exciting 24 hours in the nanoracing panorama. “The team has great expertise in molecular synthesis and scanning tunneling microscope manipulations” Prof. Rodolfo Miranda, director of IMDEA Nanociencia, says. The team is sponsored by the Specialised Group in Nanoscience and Molecular Materials (GENAM) from the Spanish Royal Society of Physics (RSEF) and the Spanish Royal Society of Chemistry (RSEQ), and by the company Scienta Omicron. The NANOHISPA team passed their rookie tests last October in an online meeting with the organizers in France.

The Écija’s and Perez’s groups will team up and travel to Toulouse for the race presentation during the C’NANO Conference 2021, on the 23rd of November 2021. The event occurs in the year we celebrate the 40th anniversary of the STM microscope invention. All the Nanocar Race II teams officially registered will present their first molecule-car prototype to the public during the MEMO satellite workshop "Single molecule mechanics on a surface: gears, motors and cars".

The 2nd international Nanocar Race is organized on the framework of the European FET OPEN project MEMO (Mechanics with Molecules). The competition will be broadcasted live from Toulouse in March, 2022. The First Nanocar Race was held in Toulouse in April 2017, and was followed live by more than 100.000 people on the NanoCarRace Youtube channel. On this occasion, a greater attention to this event is expected. All teams will compete at the same time in the same room in Toulouse, controlling their nanocars remotely.

8 drivers. 24 hours. Don’t miss out another incredible edition of the Nanocar Race.