Among 1D nanomaterials, single-walled carbon nanotubes (SWNTs) are adorned with a particularly attractive set of physical properties. The combination of high electric and thermal conductivity, outstanding strength and stiffness, and a finite band-gap, make them suitable for a wealth of applications, from electronics to biology. At a time where SWNTs are past their hype, it is worth reminding that the advances in synthesis and purification technologies allow working with samples purer than ever. In Pulickel Ajayan’s words “now is the most interesting time to work on carbon nanotubes” (Chem. Eng. News 2015, 93, 10-15). Or, in other words carbon nanotubes still rock!!!

Know what else rocks? Mechanically interlocked molecules (MIMs): MIMs consist of two or more separate components which are not connected by chemical (i.e. covalent) bonds. Examples of MIMs are rotaxanes, where one or more macrocycles are trapped onto a linear component (thread) by bulky substituents at its ends (stoppers) that prevent dissociation, and catenanes, where two or more macrocycles are interlocked as links in a chain. These structures are true molecules, as each component is intrinsically linked to the other through a mechanical bond, which prevents dissociation without cleavage of one or more covalent bonds. They are therefore fundamentally different from supramolecular species, where equilibrium between bound and unbound states always takes place.

Cartoons showing the structure of a [2]catenane and a [2]rotaxane.

We have developed a general strategy for the synthesis of rotaxane-type derivatives of carbon nanotubes, the first example of mechanically interlocked derivatives of SWNTs which we call MINTs (Angew. Chem. Int. Ed., 2014, 53, 5394-5400, Highlighted in Chem&Eng News, 2014, 92, 31; ChemPlusChem, 2015, 80, 1153–1157; Chem. Commun. 2015, 51, 5421-5424.; Chem. Sci. 2017, DOI: 10.1039/c6sc03894h.). In the key rotaxane-forming step, we employ U-shaped macrocycle precursors equipped with two recognition units (i.e. two molecular fragments that like to “stick” to the nanotube) and terminated with bisalkenes that are closed around the nanotubes through ring-closing metathesis (RCM). Because the SWNTs are too long for the macrocycle to find their tips and “fall off”, the mechanical link in MINTs is as kinetically stable as a covalent bond, but without messing with the native structure of the SWNTs.

As the song goes: if you liked'em then you should have put a ring on them, and we did! So...are the macrocycles really around the SWNTs? Want to see pictures, right? There you go!

Examples of HR-TEM pictures of MINTs, showing the macrocycles around the SWNTs. Pretty, aren’t they?

Besides the MINT’s good looks, we now know they might also be useful. For example, we know that MINTs are better at reinforcing polymers than pristine SWNTs, and way way better than classic supramolecular complexes with the exact same chemical composition! (ACS Nano 2016, 10, 8012-8018). And we know why: the macrocycles around the SWNTs force the polymers to adopt an elongated conformation, which helps them profit from the extraordinary mechanical properties of the nanotubes!

We also know that the electronic properties of the SWNTs are affected differently than in a classical supramolecular modification (Nanoscale, 2016, 8, 9254-9264).

And this is only the beginning. We are hoping to use MINTs as catalysts, sensors, and...yes, molecular machines! So watch this space.

The isolation of graphene was recognized with the Nobel Prize in Physics 2010, awarded jointly to Andre Geim and Konstantin Novoselov. Graphene is a strictly 2D layer of carbon atoms arranged in a honeycomb structure, and it is the thinnest, strongest and most conductive material known. It was isolated by mechanical cleavage from graphite using scotch tape! (seriously, watch). 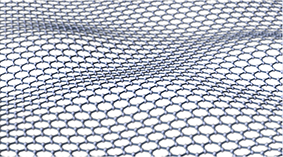 This is what graphene looks like at the molecular level. All atoms are carbon.

The same strategy can be applied to other layered materials in which atoms in-plane are bound through strong covalent bonds and layers are held together by weak van der Waals interactions. Since the discovery of graphene, many other bidimensional materials have been isolated and characterized. We now have a pretty big collection, spanning the whole range of band-gaps from hexagonal boron nitride (h-BN) an insulator (band-gap ca. 5-6 eV), to transition metal dichalcogenides (TMDCs), which are semiconductors with band-gaps in the vis-NIR region (1-2 eV) to black phosphorus (band-gap 0.3-2 eV). With an ever-expanding toolbox of materials and properties, bidimensional materials offer the promise of a technological revolution.

While our friends the physicists have been busy studying the properties of these amazing materials, the chemists were doing what they do: make things and modify things. In the making part, the chemists developed new methods of production, by liquid-phase exfoliation (LPE). Basically, you immerse the bulk material in a solvent that can get between the weakly bound layers, and separate them, usually using ultrasound irradiation. This way you can obtain much larger quantities of bidimensional material than through mechanical exfoliation, and you obtain it in a very convenient “ink” form.

We begun in the field of LPE exfoliating graphite using porphyrins as “detergent” (Int. J. Mol. Sci., 2015, 16, 1704-1714), and got interested in TMDCs by interaction with our very smart colleagues at IMDEA. Our main advance in the LPE of TMDCs is obtaining single-layer enriched suspensions in a single step, without purification, by using carefully controlled conditions (2D Materials 2016, 3, 035014).

Stacking one 2D material on top of another is a particularly interesting way to make new ultrathin materials, taking the best from each material. These “nanosandwhiches” of 2D materials are called “van der Waals heterostructures”, as the materials are contacted through dispersion-type noncovalent forces. These van der Waals heterostructures are made one-by-one, which is painfully slow and has other disadvantages. For example, it is nearly impossible to align the crystal lattices of the materials perfectly, and very often you include impurities between the 2D material layers.

Very recently, in collaboration with Andres Castellanos-Gomez and J. J. Palacios, we have shown that there is another way to obtain van der Waals heterostructures: let Nature make them for you! Franckeite is a naturally occurring mineral of the family of the sulfosalts that is composed of alternating layers of PbS and SnS2 that have really cool properties (small band-gap, air-stable, etc.). We have exfoliated it both mechanically and through LPE, characterized it, and made several prototype devices (Nat. Comm. 2017, DOI: 10.1038/ncomms14409).

TEM images of ultrathin franckeite. Note that the difference in crystal lattices results in the formation of a wavy Moiré pattern.

One of the main challenges in the chemistry of bidimensional materials is to achieve spatial selectivity to allow for molecular patterning, since all basal atoms show identical reactivity. This can be viewed as a classical regioselectivity problem in organic synthesis. As chemists, we keep up with the chemistry literature. When Ruoff and co-workers reported the functionalization of graphene selectively at areas with higher local curvature (Chem. Commun., 2013, 49, 677), we immediately related their results to the corrugated graphene over Ru that is routinely grown by the group of Profs. Amadeo L. Vázquez de Parga and Rodolfo Miranda at IMDEA Nanociencia. After a series of failed experiments due to overfunctionalization, we serendipitously discovered that graphene was reacting with the solvent! A little more tweaking lead to the first method for covalent functionalization of graphene with 98% atomic selectivity (Nano Lett. 2016, 16, 355-361). 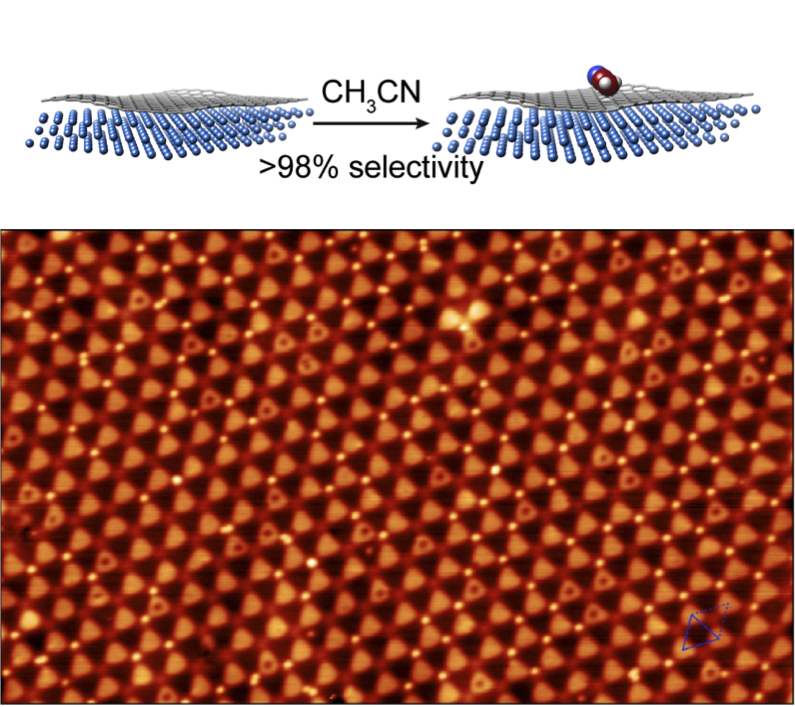 Attaching CH2CN· radicals at specific atomic sites of graphene! Very bright small spots in the STM image are -CH2CN addends. The larger and less bright areas are graphene “hills” due to the Moiré pattern.

We are also interested in attaching molecules to other 2D materials using weaker, noncovalent forces. For example, we have literally dropped organic dyes (perylene bisimides and porphyrins) on top of MoS2-based photodetectors. The functionalization results in a dramatic enhancement of the photoresponse and responsivity to visible light of up to three orders of magnitude. Remarkably, the process is fully reversible and reproducible (Chem. Commun. 2016, 52, 14365-14368). 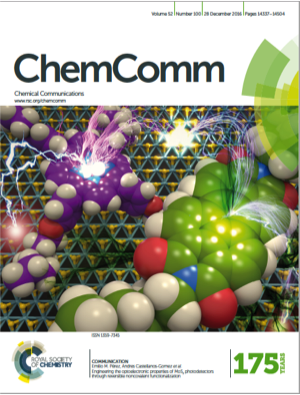 A deep understanding of weak noncovalent interactions is of key for all our other research interests. So we also like to spend time developing tools that help us understand how molecules interact with other molecules, or with nanomaterials.

To study supramolecular interactions, chemists measure association constants, basically, a number that indicates how strong the noncoalent interacitons are, so it allows us to compare different interactions. Well, despite more than a decade of research in supramolecular chemistry of SWNTs, there was no standard method for the quantification of their noncovalent chemistry in solution/suspension. As supramolecular chemists, this was a challenge that excited us. We managed to solve it by realizing that you actually don’t need to know the molar concentration of SWNTs to extract accurate association constants. It is enough to know the concentrations of free and bound host. Well, d’oh! To test the method, we measured binding constants between five different hosts and two types of SWNTs in four solvents -yes, a nice big data sample, that’s the way we roll. We determined numeric values of Ka from 1 M-1 (very very small) to 104 M-1 (rather large). See how we did it here, Chem. Sci., 2015, 6, 7008-7014. 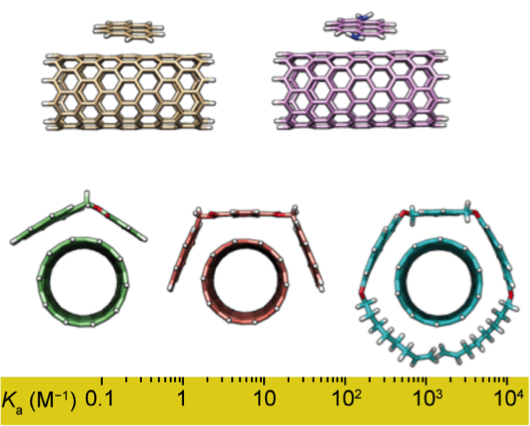 Now we all have a ruler to measure small molecule-SWNT interactions. You’re welcome! 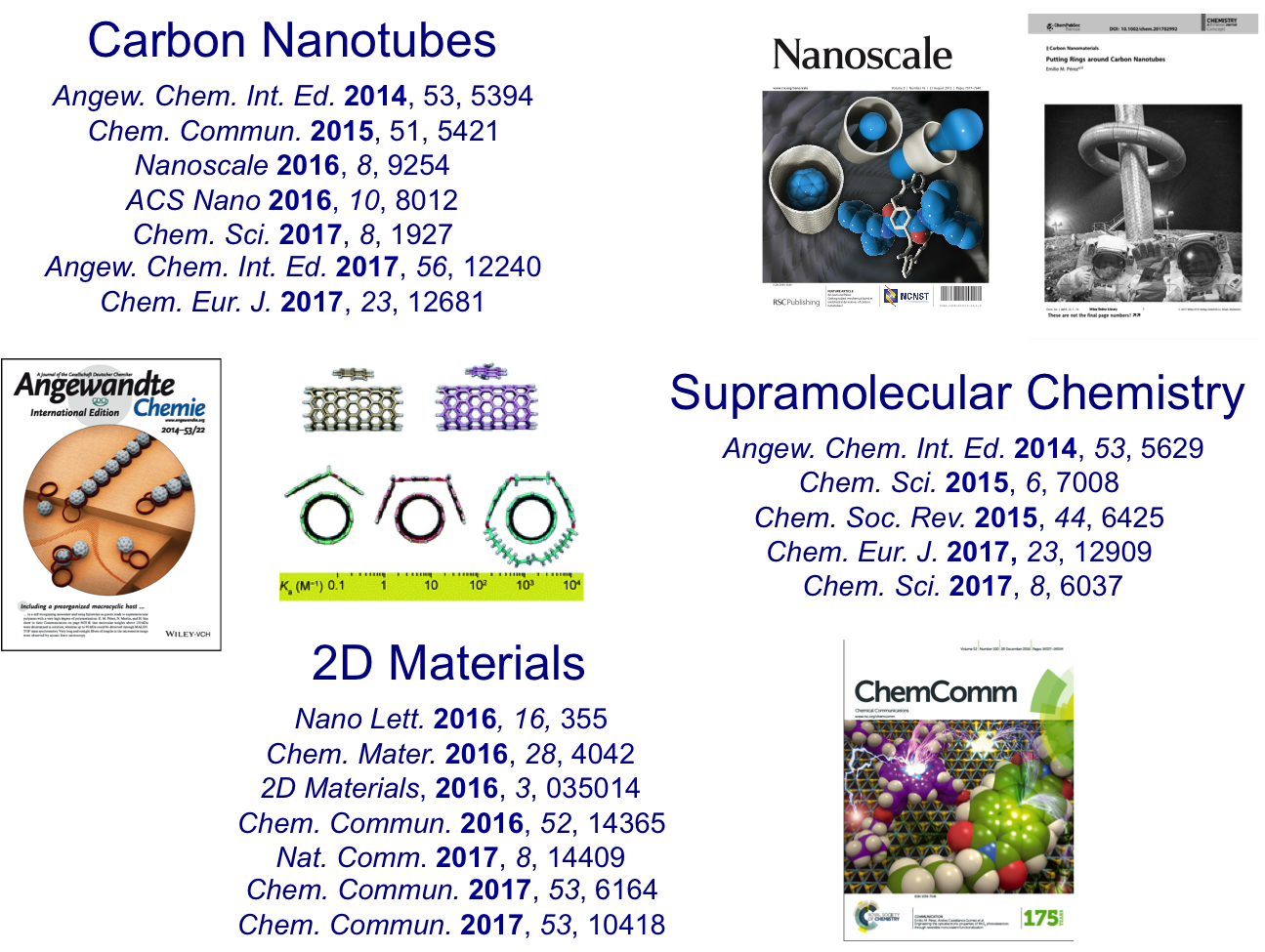