Towards metallic polymers by exploiting two faces of the same coin: topological order and π-conjugation

Organic (synthetic) metals attracted huge attention in the final decades of the last century due to their envisioned futuristic applications at affordable costs. This field was boosted by the early advances in polyacetylene polymers, which exhibited high conductivity upon doping and opened a new route towards organic electronics and the Nobel Prize to their discoveries. However, scientists found that dopants compromised the stability of the polymers, thus reducing their applications as synthetic metals in real devices.

From a theoretical point of view, early efforts to understand the fundamental processes in the model trans-polyacetyene system resulted in the Su-Shrieffer-Heeger (SSH) model. Such a simple, but ingenious theory, revealed that the resonant form adopted by the polymer, which emanates from the conjugation of pi-electrons (pi-conjugation), can alter the electronic class of the material in an unexpected way. Here, it is worth to point out that topological band theory classify gapped materials by studying mathematically their band structure into trivial (insulators) and non-trivial materials (topological non-trivial insulator). In the SSH model, one resonant form behaves as a normal insulator, whereas the other resonant form one is a topological non-trivial 1D insulator, i.e. a gapped material featuring in-gap edge states. Thus, a crossover of resonant form can change the topological class of a polymer. But polyacetylene, in any of its resonant forms, is a gapped material. As a result, this polymer can only increase its conductivity by being chemically or electrochemically doped.

Thus, the question arising is: Can we engineer 1D organic intrinsic metals? To answer this query, we need to come back to the roots of topological band theory. Such a theory states that the transition between two gapped materials must proceed through closure of the bandgap, i.e. through a metallic state. Thus, if we could engineer a family of chemical materials in which to tailor the topology of its bands by tuning the chemical structure, it could become feasible to approximate or even locate the material at the topological transition point.

Scientists of the above mentioned institutions report in the prestigious journal of Nature Nanotechnology a combined experimental-theoretical investigation bridging the fields of topological band theory (solid state physics) and pi-electron conjugation (organic chemistry) in order to give rise to quasi-metallic organic polymers.

“For the first time we can observe with scanning probe microscopy the connection between the topological class and the resonant form of a polymer, paving avenues to engineer novel electronic classes of materials, including intrinsic organic metals and one-dimensional topological non-trivial insulators” Prof. Ecija says. “To illustrate such concepts we relied on the power of organic synthesis to prepare suitable molecular precursors and we trusted in on-surface chemistry to drive, through an unprecedented reaction, the engineering of the polymers” Prof. Martín remarks. First, a new family of acene polymers, classified by the number of benzenes units in their backbone (n=1, 2, 3…), is identified to undergo a discrete topological transition. For small n (n<5), polymers are in the trivial phase, while for large n (n>5) are non-trivial, identifying the boundary close to n=5 (pentacene polymer).

The different polymers are fabricated with atomic precision on top of gold substrates implementing ultimate on-surface synthesis approaches, tuning at will the topology and the electronic properties of the resulting polymers. “According to our theoretical prediction the pentacene polymer is located in non-trivial topological phase very close to the topological boundary with very small gap” says Jelinek. Indeed, experimental measurements revealed their quasi-metallic behavior with 0.35 eV experimental band gap and the presence of in-gap topological edge states.

Authors generalize the concept by extending it to the polymer family of periacenes, achieving band gaps as low as 0.3 eV for bisanthene polymers, which are located close to the topological transition. Additionally, the different resonant forms of the pi-system can be identified, demonstrating an ethynylene-bridged aromatic nature for the trivial polymers, whereas locating a cumulene-linked p-quinoid resonant form for the non-trivial wires.  Thus, there is a crossover between the resonant forms, which corresponds to the topological band transition.

In summary, this work serves both as a proof of the intimate relation between resonant form and topological class, while offering a new tool to produce stable organic intrinsic metals by designing polymers at the exact topological boundary.

This publication is the result of a collaborative research between IMDEA Nanociencia, Complutense University of Madrid, Palacký University Olomouc and Empa (Swiss Federal Laboratories for Materials Science and Technology) researchers. It is partially funded by the Severo Ochoa Programme for Centres of Excellence in R&D, and developed within the frame of the research projects ELECNANO (ERC) and QUIMTRONIC (Comunidad de Madrid). 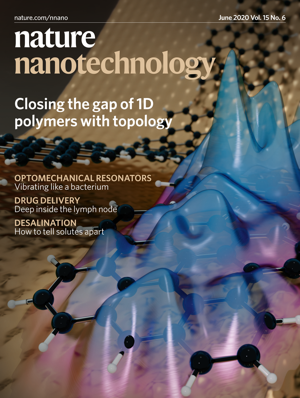 IMDEA Nanociencia Outreach Office
This email address is being protected from spambots. You need JavaScript enabled to view it.
+34 91 299 87 12
Twitter: @imdea_nano
Facebook: @imdeananociencia