During his PhD in Physical-Chemistry from the ICMCB-CNRS (Bordeaux) and later throughout three European post-doctorates states at the University of Mainz, Leiden Institute of Chemistry and the University of Barcelona, where he initially held a Juan de la Cierva fellowship, he became an expert in the design, synthesis and characterization of novel molecular-based functional materials. In 2012 he was awarded with an IEF Senior Marie Curie Fellowship at the LCC-CNRS in Toulouse to work on size-reduction effect on switchable coordination chemistry materials called Spin Crossover. Later, he obtained a “Ramon y Cajal” fellowship and joined in 2016 IMDEA Nanociencia as Researcher. He is author of more than 70 papers with an h-index=30.

Dr. Sánchez Costa was awarded by the Royal Society of Chemistry, by the Catalan AGAUR and the Advanced Light Source from the UC Berkeley (USA). In 2009 he obtained the Lecturer professor and Assistant professor official credentials from the Regional and National Agencies for the Education Quality (AQU and ANECA respectively).

Our research line is centred on the frontier areas of Coordination Chemistry, Inorganic Chemistry and Material Science on the development of new metal-based coordination complexes at the macro- and nanoscopic scale for their technological application in the fields of magnetism, energy storage, catalysis, memory and sensing devices. 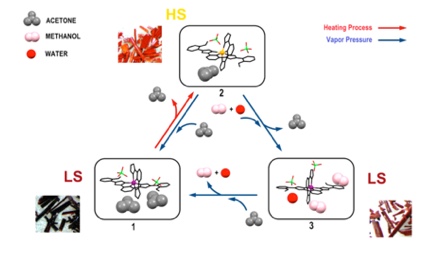