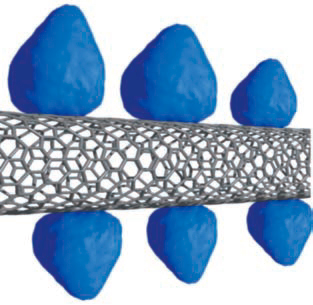 The aim of the DOTUBE proposal (ERG 239256) was to study the interaction between CdSe semiconductor nanoparticles (quantum dots) and carbon nanotubes. These hybrid systems attract considerable attention due to the photoconductive response obtained upon optical excitation. A good understanding of such interaction has been achieved from the synthetic point of view by studying the reactivity of CdSe nanoparticles prepared in the absence or presence of several halogenated co-solvents. The nanoparticles have been studied by means of nuclear magnetic resonance spectroscopy and X-ray photoelectron spectroscopy, among other techniques. Furthermore, the effect of the co-solvent on the nucleation, growth and/or interaction with carbon nanotubes has been evaluated for other types of nanoparticles such as ZnO, PbS, alloyed metals (PtFe) or combination of semiconductor and metals (CdSe/Au).