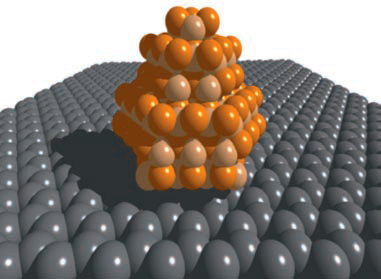 The performance of devices based on semiconductor nanocrystals (NCs) improves both with stronger interface interactions among NCs and between NCs and solid electrode surfaces. MAT2009-1348 focused on the synthesis and characterization of NCs on flat graphitic surfaces by surface science techniques. In particular, the combination of X-ray photoelectron spectroscopy (XPS) and solid 31P CP/MAS NMR (cross-polarization/magic angle spinning nuclear magnetic resonance) shows that the selective substitution of long organic chains by chlorine atomic ligands during the colloidal synthesis promotes the adsorption of CdSe NCs to carbon sp2 surfaces, leading to the formation of well-ordered NC monolayers on graphitic materials. The degree of order was compared with those obtained using other methodologies such as Langmuir-Blodgett, spin coating, the vertical deposition method or by electrospray in ultra high vacuum. This comparison shows valuable information about the interaction taking place between nanoparticles and graphitic surfaces.