The morphology of the active layer of a bulk heterojunction (BHJ) solar cell, made of a blend of an electron-donating polymer and an electron-accepting fullerene or nonfullerene derivative, is known to play a determining role in the performance of organic solar cells.

After a broad introduction, we first describe –on the basis of results from molecular dynamics simulations and long-range corrected density functional theory calculations: (i) the nature of the binding interactions at the donor–acceptor interfaces; (ii) the molecular-level packing in the pure phases as well as at these interfaces; and (iii) the impact of the system dynamics on the interfacial electronic structure.

We then discuss how even minor changes in the chemical structure of the polymer backbone have been shown experimentally to change substantially the blend morphology and the resulting solar-cell efficiency. Taking a series of representative systems based on benzothiadiazole-quaterthiophene polymers and PC71BM, we elucidate the impact of the chemical changes on the ″local″ morphology. We focus on the extent of polymer-fullerene mixing, on their packing, and on the characteristics of the fullerene-fullerene connecting network in the mixed regions, which are all aspects that are difficult to access experimentally. We are able to rationalize the evolutions in power conversion efficiencies within the polymer series.

Finally, we address some of the peculiarities observed in the PIPCP-fullerene blends.

This work is supported by the Office of Naval Research, namely in the framework of the MURI Center on Advanced Organic Photovoltaics. 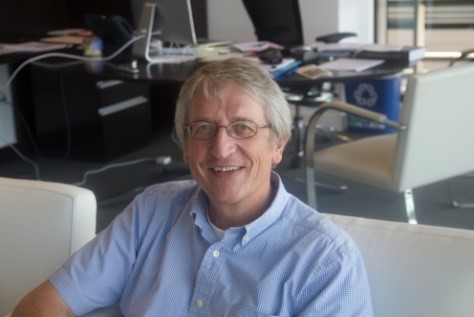 Jean-Luc Bredas received his Ph.D. from the University of Namur, Belgium, in 1979. In 1988, he was appointed Professor at the University of Mons, Belgium, where he established the Laboratory for Chemistry of Novel Materials. While keeping an “Extraordinary Professorship” appointment in Mons, he joined the University of Arizona in 1999 before moving in 2003 to the Georgia Institute of Technology. In July 2014, he took a 2-½ leave of absence to King Abdullah University of Science and Technology (KAUST) where he served as Distinguished Professor of Materials Science and Engineering and Director of the KAUST Solar and Photovoltaics Research and Engineering Center. At Georgia Tech, where he resumed his activities in January 2017, he is Regents’ Professor of Chemistry and Biochemistry and holds the Vasser-Woolley and Georgia Research Alliance Chair in Molecular Design. He is a Georgia Research Alliance Eminent Scholar since 2005.

His research interests focus on the computational characterization and design of novel organic materials for organic electronics and photonics.